Share this tribute
Memorial Candles Lit for Daniel | SEE ALL
Light a Candle
"We are honored to provide this Book of Memories to the family."
— Warner-Wozniak Funeral Service
Funeral Details Memory Wall Photos & Videos Send Flowers

Print
Daniel Lesniowski of Clifton, entered eternal life on April 15th, 2018, he was 40. Daniel was born in Mielec, Poland on March 31st, 1978 to Kazimierz and Ewa (Lasek) Lesniowski. He came to the United States in 1996. Daniel was married on April 24th, 1999 to Anna Sypek. Since coming to the United States he has lived in Passaic and Clifton. Daniel was a heavy equipment mechanic, and last worked for a company in Totowa, NJ. He has been a parishioner of St. Brendan's Church in Clifton. Daniel is survived by his by his beloved wife Anna, his cherished children Weronika and Sara. He is also survived by his devoted parents Kazimierz and Ewa, his sister Bernadetta and her husband Piotr Sadlocha, his brother Dariusz and his wife Iwona Lesniowski, his sister Barbara Beloat, and brother Dawid and his wife Marcelina Lesniowski. Visiting 2-4 and 7-9 pm, Wednesday, April 18th, 2018. A funeral Mass will be celebrated 10am on Thursday, April 19th, at St. Joseph's Church, 7 Parker Ave, Passaic, NJ. Daniel will be laid to rest at St. Mary's Cemetery in Saddle Brook, NJ. www.WarnerAndWozniak.com

To send flowers to the family of Daniel Rafal Lesniowski, please visit our Heartfelt Sympathies Store.

We encourage you to share any memorable photos or stories about Daniel. All tributes placed on and purchased through this memorial website will remain on in perpetuity for future generations.

J
Sorry for your loss. We will keep Daniel in our prayers. If you will need anything Anna please don't hesitate and call us. John & Maria Babon.
John & Maria Babon - Wednesday April 18, 2018 via Condolence Message
Share This:

PK
My deepest sympathy in the loss of Daniel. May he rest in peace. May the Good Lord give you strength and courage to carry on in the days ahead without him.
Patricia A Kramarz - Wednesday April 18, 2018 via Condolence Message
Share This:

For our friend Daniel, may you rest in peace
The Paluch Family - Wednesday April 18, 2018 via Heartfelt Sympathies
Share This:

Ania, our condolences to you and your loved ones. We are deeply saddened by this loss you and your family have encounterd. May our prayers give comfort and God give you peace.
Marta & Marek Gumieniak - Tuesday April 17, 2018 via Heartfelt Sympathies
Share This: 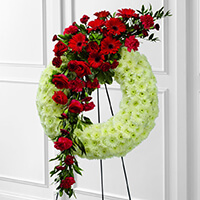